Galerie Dantendorfer is pleased to show the work of Kurt Hüpfner in an extensive studio exhibition. We will display changing artworks of the Viennese artist for a view months, to give the visitors the chance to experience the whole range of Hüpfners oeuvre.

Kurt Hüpfner - painter, sculptor, draftsman, author, visionary and much more. One word is not enough to describe the Viennese artist and his 70-year oeuvre. Born in Vienna in 1930, Hüpfner first got in touch with art and literature in his youth through reading cultural magazines such as “Der Turm” or “Der Monat”. On the title page of the “Turm” he first saw a modern painting (The Man with the Carnation) by Vincent van Gogh in 1946 and was “struck by lightning”. One year later he began his education as a commercial artist at the Higher Graphic Education and Research Institute in Vienna-Neubau. There he laid the basis of his drawing training, which accompanied him throughout his work. In the 1960s Hüpfner was a permanent guest in the reading room of the Albertina in Vienna to satisfy his hunger for education and inspiration. He started to experiment with the practice of “automatic drawing”, which is not planned, but rather flows intuitively from the hand of the artist. The origins of this lie in the écriture automatique of the surrealists of the 20s. Later he used these drawings as studies for sculptures and assemblages.

A turning point in his work was the production of his first sculptural work Lady with a Beautiful Hairstyle in 1962, which he reinterpreted in 1969 in the woodwork Nymph Cloacina. Hüpfner spends his entire life in Vienna. He only travels a few times with his wife Fritzi or through his job as a chauffeur, but none of these stays made a lasting impression on the artist. Due to limited financial resources, he is often forced to use everyday materials such as recycled waste or limewood. In the 80s and 90s he also made the first plaster and terracotta sculptures, which he often painted with oil paint.

Hüpfner's artworks are thematically shaped by personal encounters and experiences, at the same time he processes memories of war and historical events of the 20th century in his art. Also striking are the many characters from novels, mythological stories and the Bible, which repeatedly find their way into his works. From this bundle of influences, the artist creates a unique world, full of mythical creatures and figures, created using a variety of materials, colours and forms. The color palette is mostly gloomy, only a few works have bright, fresh accents. The works appear mostly raw and coarse, the pen and brush strokes and especially in the sculptures, the traces of the artistic hands and tools can still be seen. Hüpfner’s art leaves ample room for interpretation, the artist himself constantly reinterprets his work. He says himself that he is not interested in the characters and the story itself, the aim is to find the right arrangement of lines on surface. What is striking is that his compositions are mostly flat and that a spatial impression is usually created by putting one flat layer behind the other. He decides to give priority to the overall effect of a work and thus to neglect obscuring details. It should give the impression of being fleeting, as if the moment in front of us would dissolve again at the same moment. 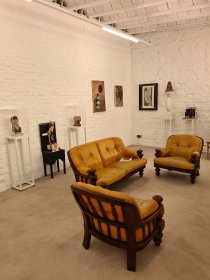 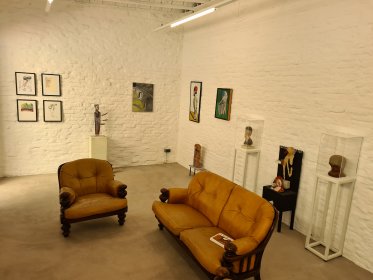 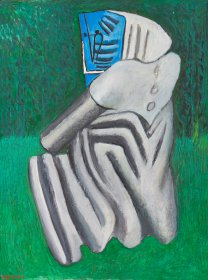 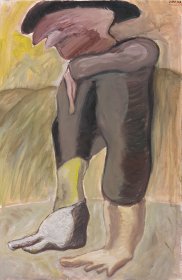 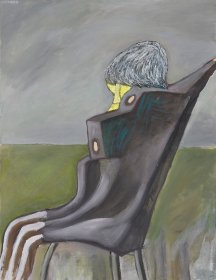 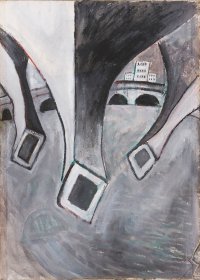 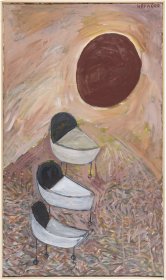 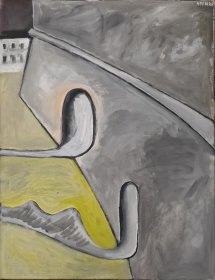 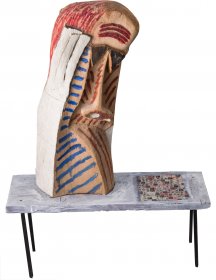 The solution to the riddle 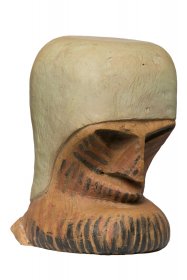 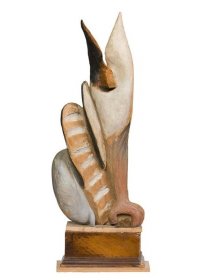 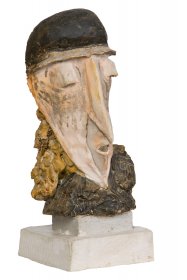 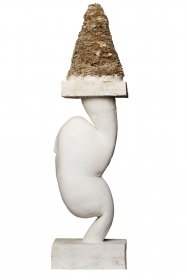 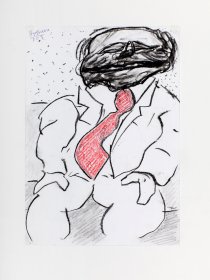 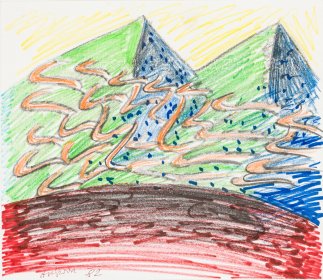