Herbert Achternbusch - writer, director, painter, actor, sculptor, set designer. He is best known today as a writer, filmmaker and riot maker of the 1970s and 1980s, but originally was a visual artist.

Born in 1938, painting has played an Important role in the life of the all-rounder from the very beginning. Back in the 1950s, when he was still attending high school in Deggendorf, Achternbusch was already painting watercolors and oil paintings. He orientated himself towards classical modernism and discovered Vincent van Gogh, whom he greatly admired. In 1961 he finally went to study painting at the art academy in Nuremberg, two years later he attended the art academy in Munich for a short time. Even then he wrote: “You can’t make art. It must come. And what comes is to be respected.”

For Achternbusch, painting was something intuitive: “The pictures are made from a different point of view, from the subconscious, and also speak differently, while a story always runs through the mind; a picture doesn't have to go beyond reason.” However, it is wrong to speak of Achternbusch “only” as a painter, sculptor, writer or filmmaker – the work in different genres is mutually dependent and builds on one another. This is how images are created in relation to text creations and there is hardly a publication without rich illustrations made by him.

The exhibition shows early works, the series In the Dusk created at the turn of the year 1987/88 to his confrontation with ancient themes in the 2000s. The presentation of bronze and wooden sculptures - which come directly from Achternbusch's (studio) house in the Waldviertel - is particularly special. In the early 1990s, the artist begins painting and designing the entire house and so creates a total work of art. He says himself: "Only in the Waldviertel do I always like to leave something of me behind, a painted wall or a figure nailed on the wall."

The highlight of the exhibition is the series In the Dusk - it consists of eight works in total, with only five being presented in the show. It was first shown in 1988 in the traveling exhibition Herbert Achternbusch. The painter, which made stops in Munich, Berlin, Dusseldorf, Vienna and Hamburg. Each work in the series is based on a poem by Achternbusch from the early 1960s, some of which have already been published. They have been cut out and glued to the work and incorporated. Dusk, the transition from day to night - from night to day, where things become gloaming and new possibilities open up. As always, Achternbusch let himself drift in the creation of the series: "I mixed them with the motifs, as coincidence once again suggested to me..."

The series is exemplary for the different levels of meaning that can be found in Achternbusch's works. Different levels of time collide when his own past in form of the poems encounters the present of the work process. Again, the text is neither described nor supplemented by the painting but opens an additional level of imagination. His pictures, like texts and films, do not refer to themselves and what they obviously represent, but go beyond themselves. 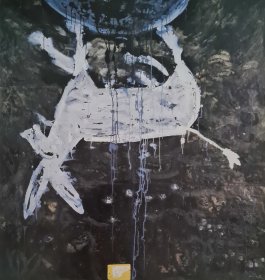 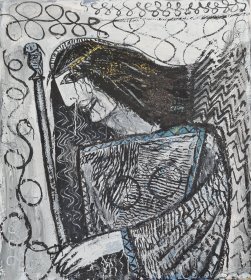 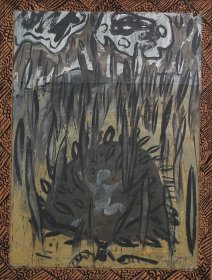 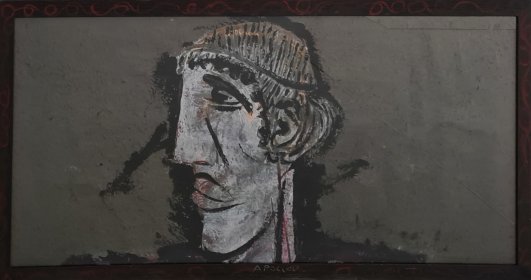 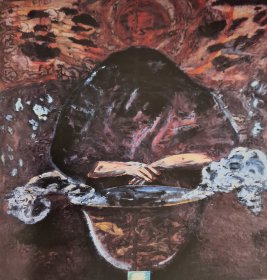 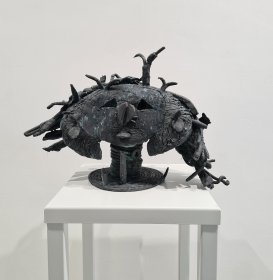 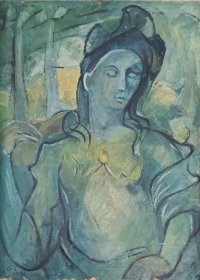